“I want to go to the bookstore,” Joseph said to me one morning at breakfast, his face serious, his intent earnest.

“Well, you need some money.  How could you make some money?”  (I’m thinking a good old-fashioned lemonade stand…he’s not.)

A long pause as he slowly considered the question.  “I could sell my artwork.”

“Okay.”  I replied, “Get it ready and we’ll have an art show.”  And so began the daily labor.  Crayons, markers, paint, and lots of paper were pulled out of the closet and day after day he worked.  Creating picture after picture.  Each one with a story to tell.

“This one is for my art show, Mommy,” became the mantra for the following weeks.  Every now and then I heard “This one is for you, Mommy,” and I admit…my mommy heart swelled with joy at each masterpiece he presented.  I could see his hard work, his love, his effort in each piece he handed over.

He gave each piece a title.  His name was added to all his artwork.  Then he began to price each piece.  Prices varied.  Some were only 38 cents while others were 1000 cents; some $3, others $300.  I think the joy was in writing all the different numbers; not so much in the anticipation of receiving the actual sum.  His self portrait (“Joseph” by Joseph) was priced at $30.  I asked him if he was willing to negotiate.  “What does that mean?” he asked.  “Well, let’s say someone really likes your self-portrait and offers you $1 instead of $30.  Are you willing to take it?”  “Oh yes, of course,” was his reply.

The day of the art show was approaching.  Invitations were mailed out.  Anticipation filled the air.  “Mommy, you’ll come with me to my art show, won’t you?”  “Of course, I wouldn’t miss it.”  “Good.  I’m glad you’re coming.”

The day finally arrived.  The artwork was hung below a sign that he had decorated.

Grandma Cindy and Grandpa Gary arrived for the weekend from Austin.  He politely offered a preview of his artwork to Grandpa Gary.  I could hear him chattering away about each piece of art.  Then Grandpa mentioned that he’d be taking some of Joseph’s artwork with him.  That possibility had clearly not crossed Joseph’s mind.  Later I gently explained that when you sell something, the other person takes it with them and gives you money in exchange.  I could see the wheels turning in his mind.  He seemed to be trying to come to terms with the idea of parting with his artwork.   I wondered if we were fast approaching an artistic meltdown.

It was finally time for the Art Show.  His guests began to arrive and ooh and ahh over his work.  I watched from a distance wondering what would happen when the first piece of art was pulled off of the wall.  The first purchase was made.  He held his hand out for the money.  And then ever so slowly he reached up and removed the art from the wall himself.  He smiled proudly and handed it over.  He had made his first sale.  I breathed a sigh of relief. 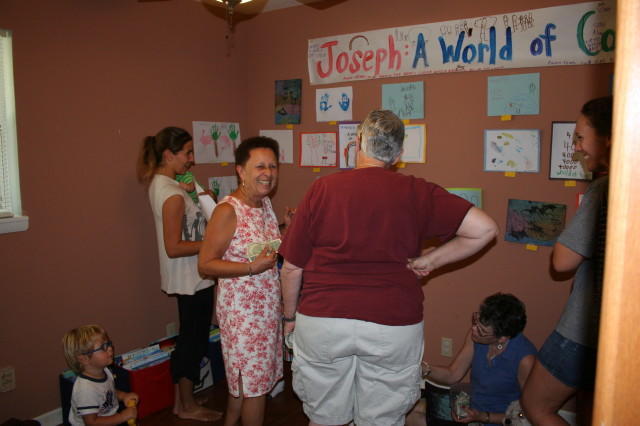 Joseph’s Art Show was a success.  Not just monetarily.  By the end of the show, he was so excited to pull a piece of artwork down and hand it over in exchange for some money.  You could see the confidence and the pride pouring forth from his happy little face.  William had a few pieces in the show and was proud to have earned $4 (I think maybe he could have earned a little more, but he kept returning people’s money saying he only wanted $4 since 4 is his favorite number).  He plans to spend his hard earned money at the golf store.  Joseph, on the other hand, has big plans for his money at the bookstore.  And he’s already planning his next show.  I think an entrepreneur has been born.

One thought on “Art Show”