So I’m not going to get this story exactly right.  I’m just not.  Time has a funny way of distorting the details and the truth is, back then I was so busy living that I wasn’t really into recording the details.  Little did I know that my future would be built on those little details.  Just know that this story is accurate, for the most part.  Truthfully, I’m not even sure where exactly to start because it seems like there were multiple threads of my life that would eventually intertwine.

To set the stage and give a few minor details…It was the spring of 2002.  I was a senior at the university with just a few summer sessions to go before graduation.  I had an auditing class at 8 in the morning.  I had a tax class at 5:45 in the afternoon, with a guy that I thought was a handsome, foreign tennis player, which it turned out he was not…oh, he was handsome but he was neither foreign (although he was born in Ecuador) or a tennis player (unless you count high school).  I was a member of something…some club…and I was responsible for selling raffle tickets.  One of my closest friends was Bart, a naval pilot.  Now, sit back and let me weave those details together for a delightful story.

“Bart, I have to sell these raffle tickets.  Please, oh please, won’t you buy a few?”  I begged my friend as we sat eating enchiladas at our favorite Mexican restaurant.

“What are the prizes?” he asked as he scooped up another bite.

“Lavrumgph,” I muttered, my mouth full.

I did not want to repeat myself.  The prizes included nothing Bart was going to want…a trip to Beaumont, a pampering basket full of goodies that I would love (but he would not!) and the top prize was a basket with a bunch of girlie stuff including a lamp with a lavender lamp shade.  I had already spent the morning convincing Dad to buy some tickets and the tickets weren’t cheap, which was making it twice as hard to sell.    I still had 20 tickets to sell and being a college student, I didn’t have any extra cash to buy them myself.  I had to sell them.

“Please, Bart.  Don’t think about the prizes…just think about how you’ll be supporting a university sponsored club.”

“How many tickets do you have left?”

“Great!  Wait…what?  All of them?”  This was Bart, after all.  There had to be a catch.  I looked over to see his devious grin…yep, there was a catch.

“For every ticket I buy, you have to set me up with one of your friends.”

“If you want me to buy them, that’s the condition.”

I was desperate.  Surely I could round up 20 friends, or at least 20 girls…or maybe after a few dates, he’d let me off the hook.  I was willing to take the risk.  I reached across the table and shook his outstretched hand.  “Okay.  It’s a deal.”

Meanwhile, in the midst of the raffle ticket sale, I was sleeping through every single one of my auditing classes.  You know, that 8:00 in the morning class.  I tried everything to stay awake.  I took a breakfast taco to class.  I tried doodling.  I took my auditing book to read.  No matter what I did, my professor’s voice was a like a sedative.  30 minutes into his lecture and I had drool running down the side of my mouth.  Unfortunately for me there were only 8 of us in the class so he definitely noticed the one sleeping student.  I was falling behind.  Not because I couldn’t keep up with the work…I can read a textbook with the best of them, but there were little things he was lecturing about that I wasn’t getting.  And I knew no one in the class.  But I did know someone who was taking the same class at a different time.

Every Tuesday and Thursday I had a tax class at 5:45.  I’d be sitting there, putting my last minute answers on my assignment and in would walk handsome, dreamy Daxson.  Always just on time.  Always prepared.  Always ready with the right answer.  For some reason, I was convinced that he was a foreign, tennis player (I ruled out foreign after listening to him talk, though).  He sat two rows in front of me and a girl named Regina sat between us.  Daxson talked to Regina and I talked to Regina, but it seemed that the conversation never involved all three of us.  I just needed one excuse to talk to Daxson.

Finally, the day came.  Our professor put us into groups and guess who was in my group?!  Yep, Daxson.  So I might not have told him the part about sleeping in class, but I did tell him that I needed a little help in auditing.  And he offered to help.

We started meeting at the library.  He helped with auditing while I stared into his dreamy eyes trying to figure out how to get him to stop talking about auditing.  So I made up an event.  Something to invite him to.

“Hey, a group of us are going to Bennigans for dinner on Thursday.  You should totally come.”  I rested my chin on my hand as I waited for his response.

“Yeah?  That sounds fun.”  Perfect.  Now to gather, what did I say, oh yes, “a group of us”.  I started inviting everyone…it had to look like a legitimate group get together, right?  Oh and a quick trip to Target for a new jean skirt, a cute top, and some sandals.

Back to Bart…remember, I sold Bart the 20 tickets.  Well he didn’t forget my end of the deal.  20 tickets in exchange for 20 dates. I set him up on some dates.  Other times we went out together and I’d introduce him to my friends.  He had a complaint about every.single.one.of.them.

“Bart, I’m running out of friends.  Stop being so picky.”  I nagged one afternoon.

“Don’t let me down…we made a deal.  A deal in which I’m supposed to meet 20 of your friends.  You owe me…plus the fact that I won that ridiculous lavender lamp shade.  Seriously, who thought that should be the first place prize?”

I really was running out of female friends.  There was one left.  My friend Crystal.  She and I had met in a class and we had become friends…the kind of friends that are friendly in class and get together every now and again for coffee and studying.  She was super sweet, but so not Bart’s type.  She was sweet and pretty and very down to earth.  I really didn’t want to drag her into this, but I was running out of options and of course, when I invited Bart to Bennigans, he asked who the lucky candidate would be that night.  I caught up with Crystal after class.  “Hey Crystal, what are you up to on Thursday night?”

She eyed me suspiciously.  “Nothing too much.  I’m studying for finals.  Why?”

“A group of us are getting together and going to dinner at Bennigans.  I thought you might want to join us.”

“And…What are you leaving out?”  (I guess our friendship was well established enough that she noticed that I was hesitating.)

“Okay, fine.  I have a really close friend.  He’s awesome and I wanted to introduce the two of you.”

“No, no…it’s not a blind date.  Really.  Totally casual.  It’ll be a huge group and I’ll just introduce you to him.  You don’t have to hang out all night.  Just please come meet him.”

“Tell me about him.”

“Not THAT old.  And he’s smart and funny and cute…”

“How old is he exactly?”  She asked again and stared at me, waiting for an answer.

“Okay, fine, the truth is, I’m trying to get a group together because I needed an excuse to invite this guy in my tax class out.  Do you know who Daxson is?”  I paused long enough for her to nod.  “I need people there!  Please!  My sister and her husband will be there along with Monica and Justin and Richard and a whole bunch of other people.  It’ll be great…you’ve got to eat and take a break from all that studying and I promise Bart will keep you entertained.”  I do not have puppy dog eyes to make myself look sad and endearing, but I tried my best.

And she did.  And there was Bart, with all his charming wit and she fell madly in love.  Bart swears she walked in with her cream colored sleeveless top and her “Jesus shoes” and a halo over her head.  I accidentally seated the two of them at the end of the table between Andy (who thought Crystal was available) and Kathryn (who thought Bart was there for her delight).  Bart spent the evening cutting both Andy and Kathryn off, making it clear they weren’t welcome in the conversation.  Finally, fed up with their interference, Bart asked Crystal if she wanted to go get a fruit cup (c’mon Bart, I introduce you to your dream girl and you invite her for a fruit cup…seriously?!)  They left together.  I didn’t hear from Bart until late the next day (in fact, I was in a panic because I called him at work in the morning to find out how it went and he wasn’t there…Bart NEVER missed work…I guess staying out late, chatting over a fruit cup and then having to part from your one true love can cause you to oversleep!) and it was only to tell me that I was off the hook…he’d found THE ONE and I could finally stop setting him up on dates. 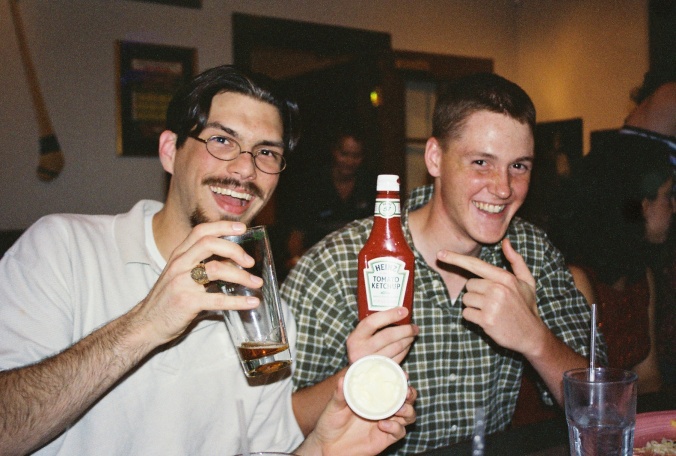 And that was the beginning of Daxson and me, as well.  The next week Daxson invited me with a group of his friends to Concan and I figured if we were going on a trip together, I’d better get to know him better.  So we spent as much time studying auditing as possible and then he made a bet with me…loser had to pay for dinner…pretty sure the bet had to do with the auditing exam but either way, the bet made dinner with him a sure thing so, of course, I took the bet.  No idea who won because, the truth is, he was way too much of a gentleman to let me pay anyways.  So our first official date (just the two of us!) was to dinner at Macaroni Grill and to see a movie.  We went down to the seawall after the movie for a walk and by the end of the night, I just knew.  This was it. 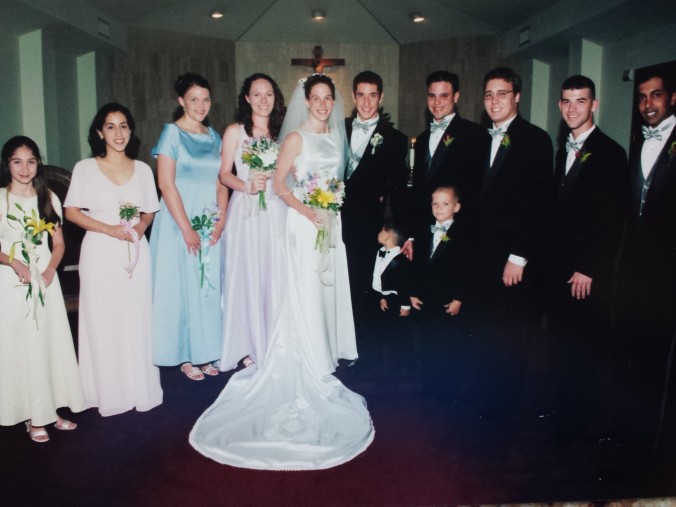 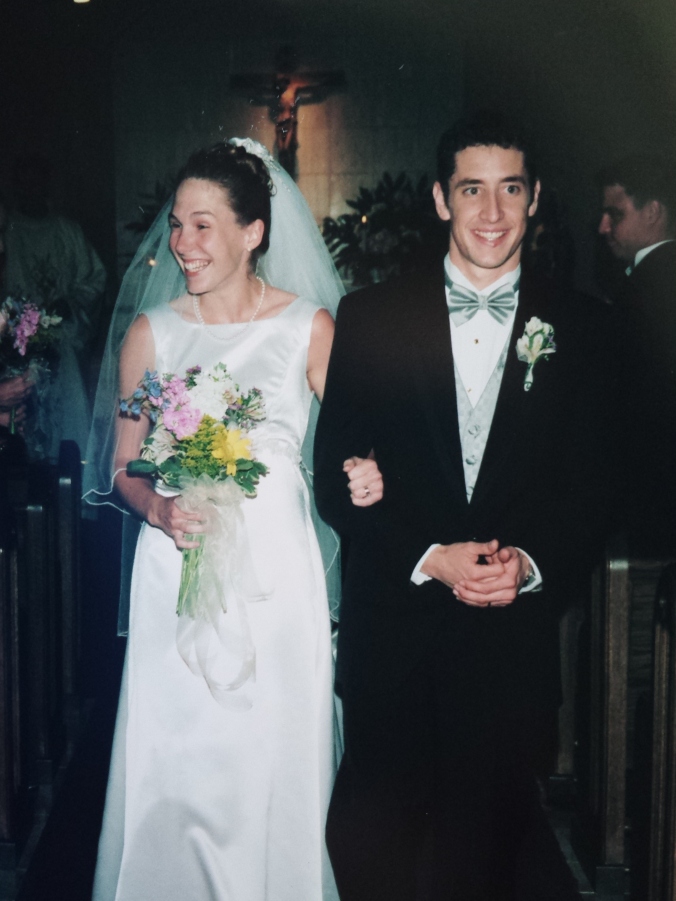 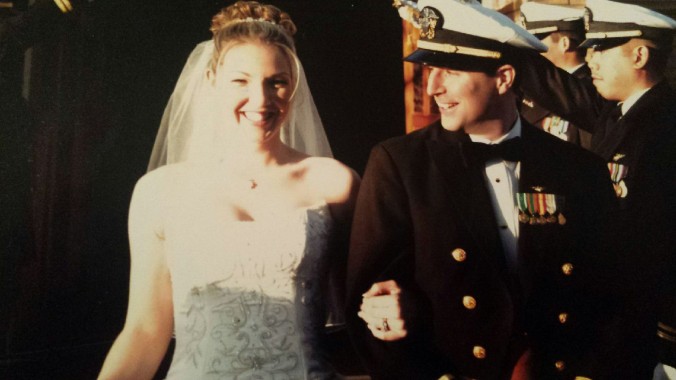 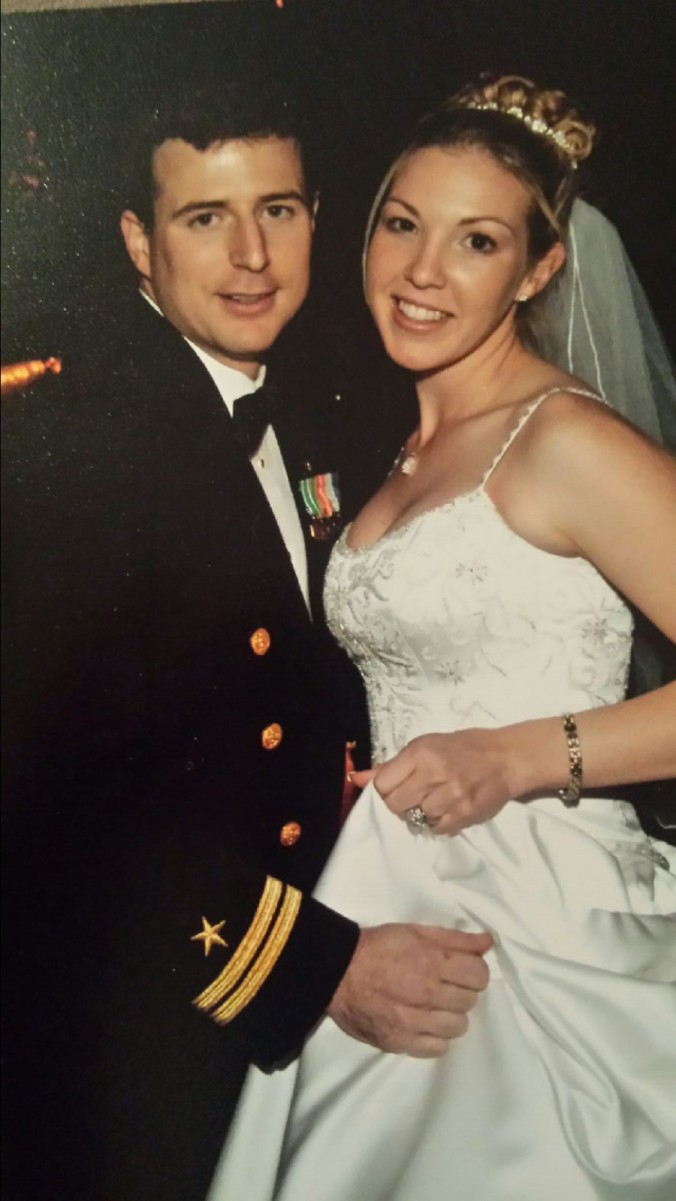 So two weddings later (mine and Daxson’s first…exactly one year and two days after our first date, which was exactly 5 days after the Bennigans gathering…Bart & Crystal’s wedding followed ours by 6 months) there are now seven beautiful children between the four of us.  And to think, it all started with that dinner at Bennigans.  This is the stuff that Hollywood makes movies out of.  Here’s to good friends, beautiful Bennigan love stories, and each of our happily ever afters. 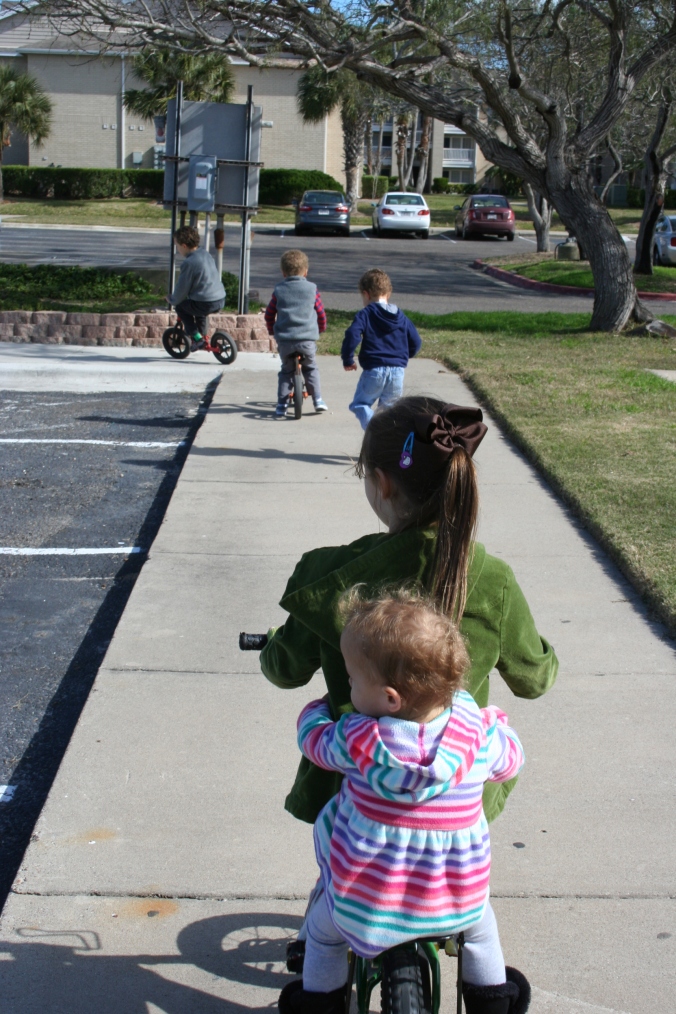 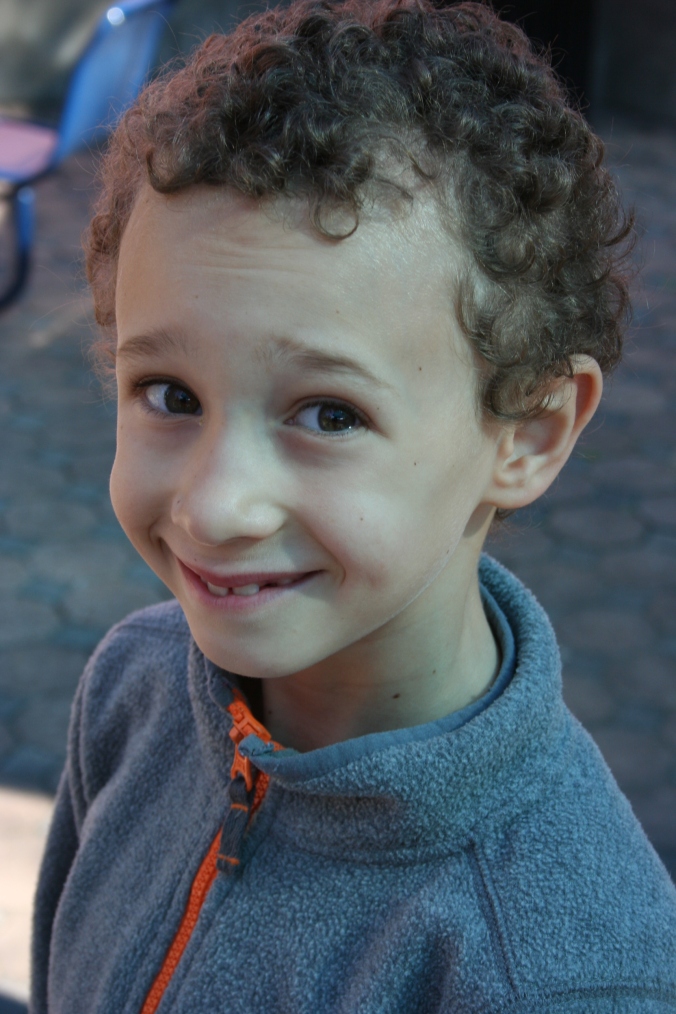 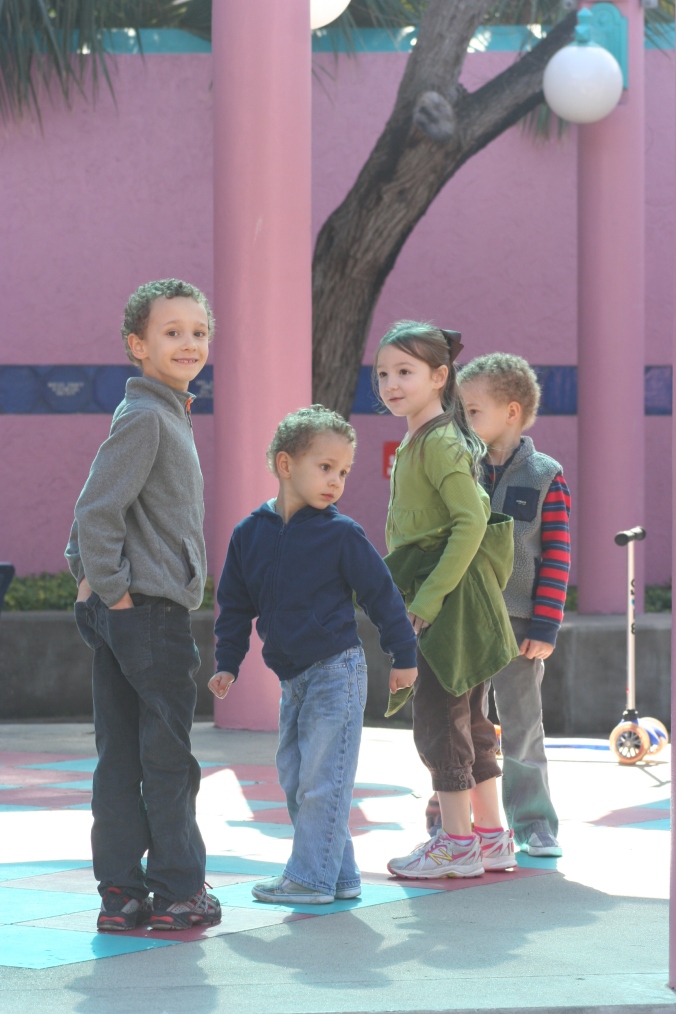 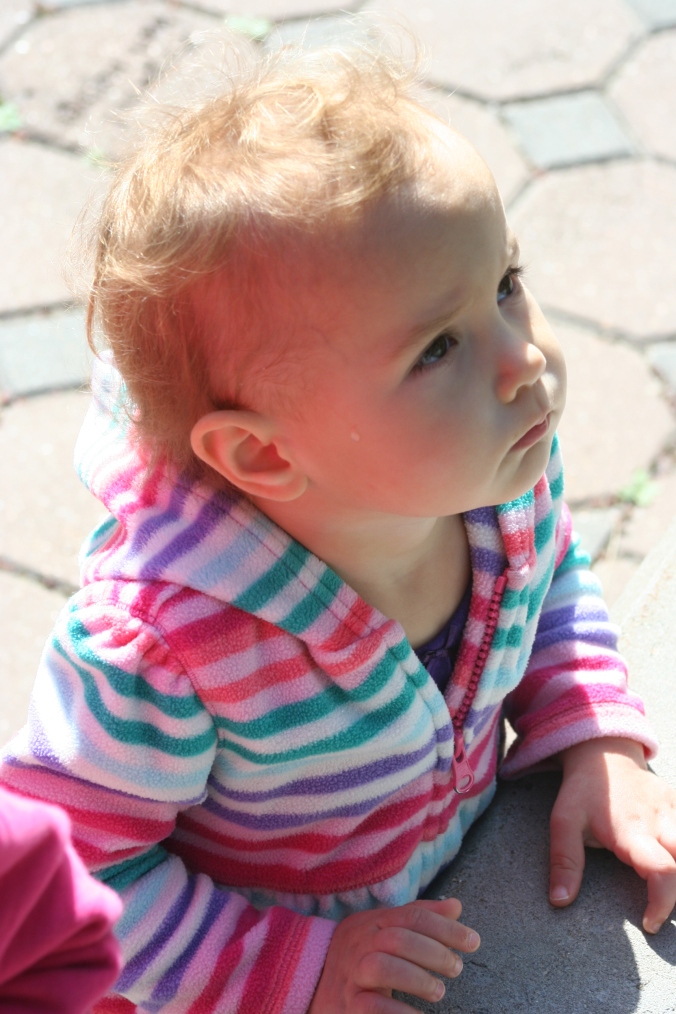 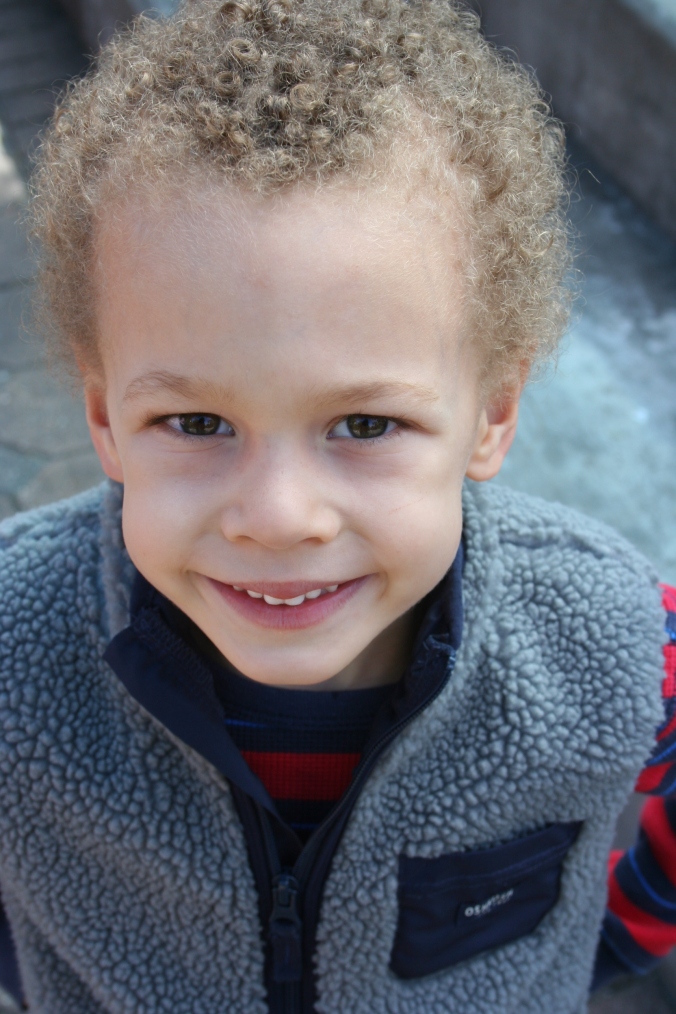 3 thoughts on “It all started with dinner at Bennigans…”