“Nature seems to have intended Texas for a vineyard.”  Stephen F. Austin

Last week we went out for a nature hike to see what is blossoming around here and we stumbled on, what I was sure, were Muscadine Grapes.  Tons of ripe, plump purple grapes.  I snapped a couple of photos so I could come home and use my book to confirm it, but I was sure I couldn’t be mistaken.  I came home and promptly forgot about the grapes (as so often happens).

A few days later, I was reading Helen Keller’s autobiography, The Story of my Life and she referred to the Scuppernong vines around her.  That was one I’d never heard, so I looked it up.  How wild!  They’re a green variety of Muscadine grapes…I had no idea there were different varieties.  I decided it was time to learn a little more about those ripe purple grapes we had just seen.

I planned to take the kids out again this week and brave the mosquitoes in search of the grapes.  We’d take our nature journals and sketch them while they were ripe.  I thought it would be handy to prepare a bit so we could have an object lesson once we got to the grapes.

{An object lesson, part of Charlotte Mason’s nature study philosophy, is a perfect opportunity to allow our children to become more observant.  We call upon them to carefully observe and examine an object using their five senses.  Object lessons should appear to be by-the-way, somewhat spontaneous discoveries where we are out and about and come across something fascinating.  Considering the fact that I am not well-versed in nature study and I am learning alongside my children, I tend to keep an eye out when we’re on a nature walk for items that I can use in our next lesson and then I prepare my object lesson before we head out.  I aim for one object lesson a week so my kids have time to absorb what they learned and to notice it in future nature walks.  I do require them to make a drawing and write down a few notable facts in their nature journals to help cement the object in their minds.  You can read more about object lessons here and here.}

Good thing I decided to be prepared!  As I began to look at photos of Muscadine grapes, I thought the leaves looked very jagged compared to the leaves we had seen.  I pulled back up the pictures that I had taken and sure enough, the leaves we had seen were not so clearly jagged.  I got distracted and walked away from the open book.

When I came back, I looked at the picture again (not realizing the page had turned while I was away) and thought, no, those look like what we saw…I could have sworn the picture had jagged leaves.  Then I looked at the top of the page and realized now I was looking at Mustang Grapes.  Wait, what?  More wild grapes in South Texas?

So it turns out there are two types of wild grapes that are seen often in this area: Muscadine (Vitus rotundifolia) and Mustang (Vitus mustangensis).  Good to know.  While both are used for making jams, the Mustang grapes are known as “cut throat grapes” because of their high acidic levels…they shouldn’t be eaten raw as they can cause burns on the lips and in the throats.  Really good to know.  (And glad I waited to confirm I had properly identified it before trying it!)

Luckily, there’s an easy way to tell the two apart.  The leaves of the Mustang grape are very fuzzy with a white underbelly whereas Muscadine grape leaves are smooth and shiny.

Grapes are an interesting study in and of themselves: viticulture is the word used for the science, production and study of grapes, whereas viniculture is the word used for the cultivation of grapes in winemaking; both of those are branches of horticulture, aka the art and practice of garden cultivation.  As for the history of grapes, they made an important contribution to Roman, Greek and early Christian civilizations.  North American grapes made an impression when the Europeans began to explore the area, so much so that they called it Vinland literally because of the crazy amount of grapes growing everywhere.  In Texas, grapes are present in archaeological findings way back to 7000 BC where evidence exists that canyon grapes were consumed at that time by Native Americans in the Devils River area.  It’s all quite fascinating stuff, but that’s a rabbit trail for another day.

For the object lesson, I decided to focus mostly on Mustang grapes (which is a bit less fascinating than the Muscadine grapes but as they were Mustang grapes we had seen, I wanted to focus on what we could actually observe).  Their leaves begin with five lobes and as they mature, the leaves become unlobed cordate shaped (heart-shaped) with a deep cleft in the base.   Again, the leaves are fuzzy on top and bottom and they have a white underside.  The leaf edges are toothed but not nearly so sharp toothed as the Muscadine.  The leaves grow along the vine in an alternate pattern  with opposing tendrils (the tendrils and teeth of the leaf are important in identification as the moonseed vine lacks both and the Virginia creeper adheres rather than entwines…this helps you avoid the poisonous look-alikes!) 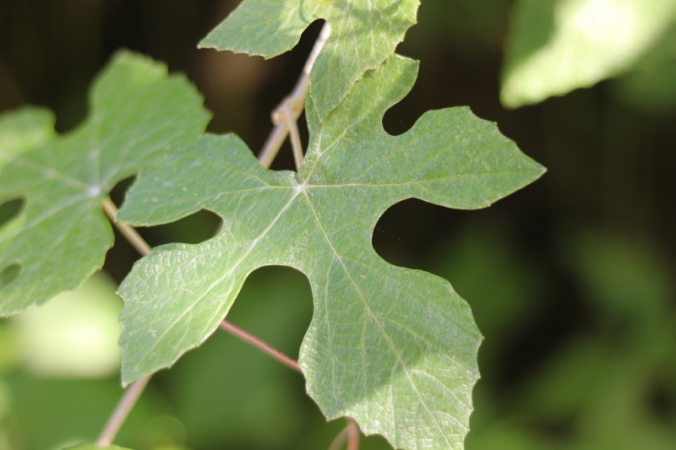 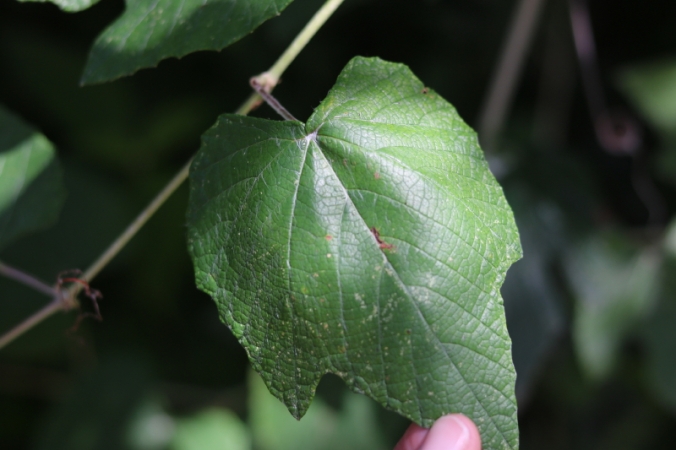 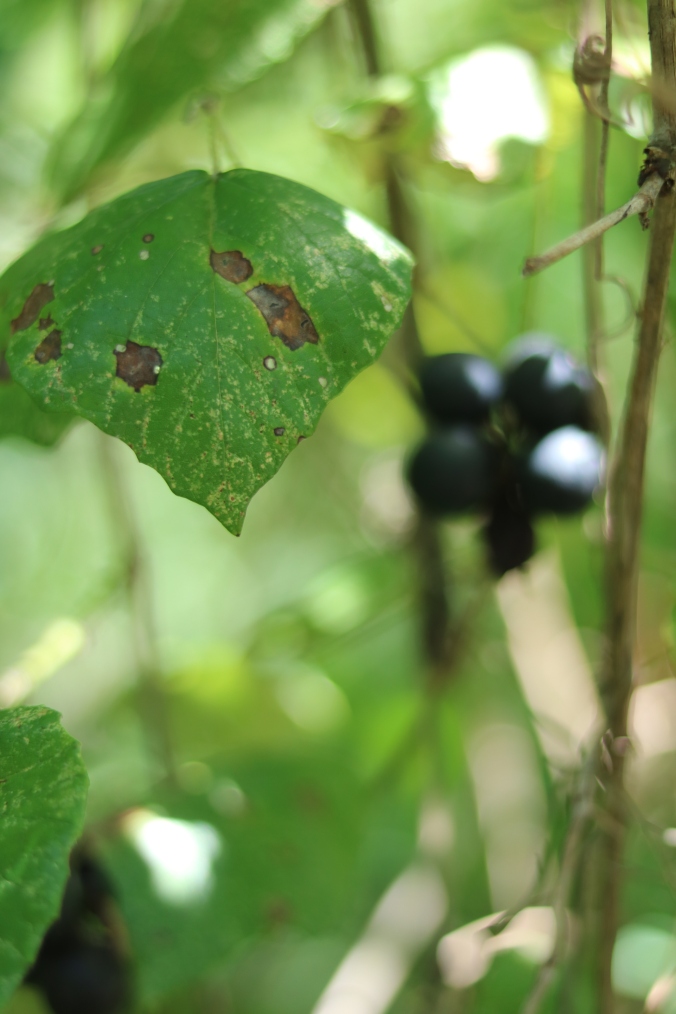 Mustang grapes are dark purple with thick, tough skin.  They are very acidic: eating them raw is a bad idea as they can cause acid burns to the lips, mouth and throat (which is how they became known as “cut throat grapes”.  To harvest them, simply cut the clusters and use gloves to process them (with plenty of sugar) into jelly, preserves, pies or tarts. 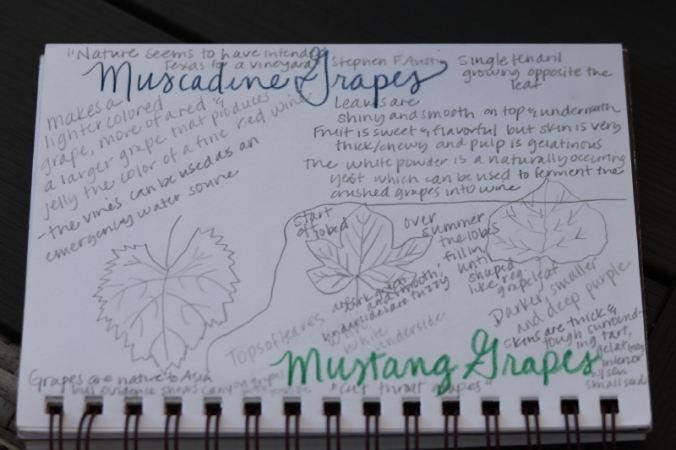 Muscadine grapes are a bit more fascinating as their fruit may be eaten raw and it is very sweet.  The seeds may be crushed and boiled to be made into grapeseed oil.  Also, the leaves, when young, may be eaten raw; the large leaves may be boiled or pickled and then stuffed.  The vines of the Muscadine grapes can also be used as an emergency water supply.

Now, we’re off to re-read The Fox and the Grapes, only because now we’re wondering if maybe it was better the fox didn’t get those grapes…who knows, maybe they were Mustang grapes ; )

*Books I used to research wild grapes included Idiot’s Guide to Foraging and Remarkable Plants of Texas; websites have already been notated throughout the post.