I imagine by now you are thinking “wow, she wasn’t kidding when she said she had an insane amount of summer photos.”  You can’t say you weren’t warned ; )  If you missed the first four parts, click here, here, here or here.  You can now breathe a sigh of relief…this is it.

In July, we had a delightful dinner with Yaya and Grandpa Larry.  The kids used to call her Grandma Nury, but over the summer I listened to the book Home Front on audio and the grandmother was called Yaya (which is Greek for Grandma).  If you listen to that book, you’ll know exactly why I began to think of Nury as Yaya…it sounded just like her and the character fit her perfectly.  The things Yaya said and did in that book were exactly the things Nury would have said or done.  I was telling the kids about it and I asked them if they agreed and thought Grandma Nury seemed more like a yaya than grandma.  They agreed and suggested we call her Yaya.  So they do.  And she loves it.  And it seriously fits her.  (Don’t bother asking about the strange picture of Larry and Dax…I figure if they want to be silly for the picture then it’s fair game for posting.)

I got a bee in my bonnet in July and decided, just a few weeks before school was set to begin, to rearrange our entire house.  I wanted to bring the schoolroom back into the house (it’s been out in Daxson’s office suite for the last few years), move the couch-bed out into the office suite (for guests), and move the majority of the toys somewhere besides the schoolroom.  I dragged Jessica into my spontaneous plan and being the good friend that she is, she agreed to help.  We started with the couch-bed.  Not being professional movers (and apparently having no one wise around), we never thought to tie the bed together.  So we got it flipped on its side and managed to get it into the laundry room (which is really a tiny hallway entry from the back door) and dang it if the bed didn’t pop open.  I was stuck between the bed and the door when it happened and I panicked.  All of a sudden my breathing went shallow and I was trapped trying to imagine how in the world we were going to get out.  Suddenly it dawned on me that I wasn’t trapped…I could simply walk out the back door.  Whew!  With that crisis over in my head, I was able to focus on a plan.  I ran to get a rope while Jessica (who may be leading a secret life as Hercules) managed to shove the bed back into place.  Jessica did some fancy knot tying, we breathed a sigh of relief and finished the rest of the moving without anymore drama.  Oh, except the part where I asked Jessica to help me move all the books off of one of the bookshelves in the old schoolroom.  Her face was priceless when she realized that I had all the books double stacked.

After everything was moved, Dax sacrificed a day (although really I think he did it in an effort to save the walls and to make sure everything was hung just so, as I tend to be an eye-baller when it comes to hanging things whereas he is extremely accurate and everything is perfect) to hang all of my millions of things back on the walls.  I really tried my best to make the school area look more like just another part of our house (in trying to be more in tune with Charlotte Mason) but it must just be in my blood to make a schoolroom look like a schoolroom.  At the end of the moving and hanging, Daxson said (thinking he was being encouraging), “Well, it’s really beginning to look like a schoolroom!”  I stifled a scream and accepted the room’s destiny.

So we went from this…

Plus a bookshelf in the dining room…

It didn’t happen as smoothly as those pictures show.  There was a whole lot of mess and stress in between (good grief, I have accumulated a lot of um, stuff, over the years!)… 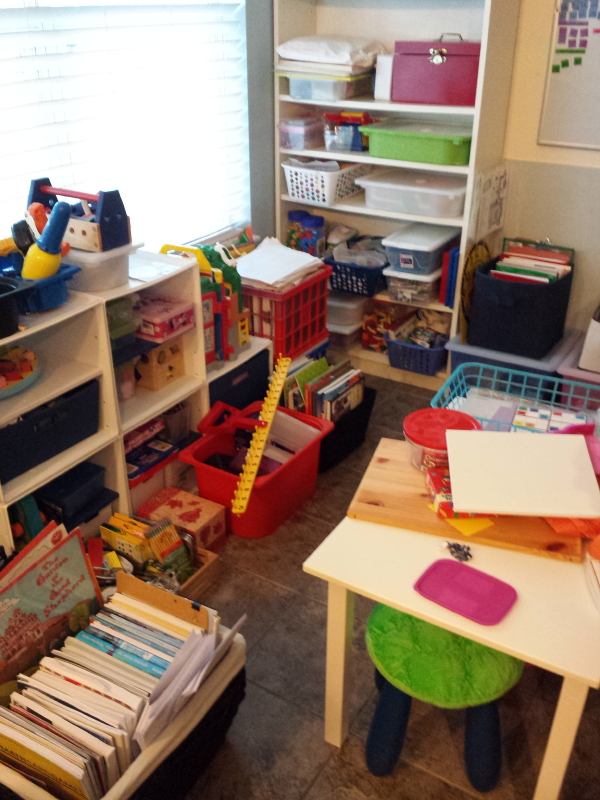 July included a few well-child check-ups which then led to a false alarm with Andrew.  His pediatrician heard a split in his heartbeat when we went in for his check-up and she could hear it in all four chambers, so just to be on the safe side, she sent him on to see the cardiologist.  (There may have been a few moments between her recommendation and our visit that I may have needlessly panicked.)  After listening to his heart, the cardiologist agreed that there was a split so he did an ultrasound and whew! it came out perfect. 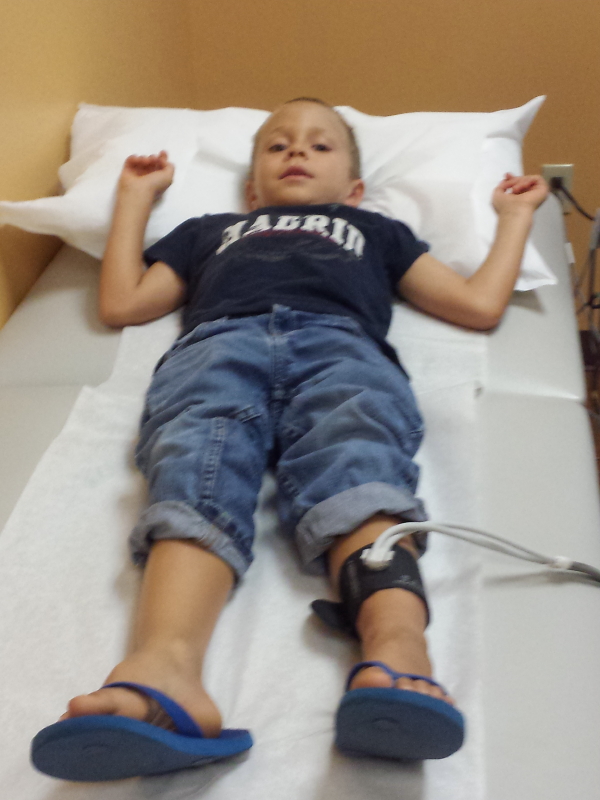 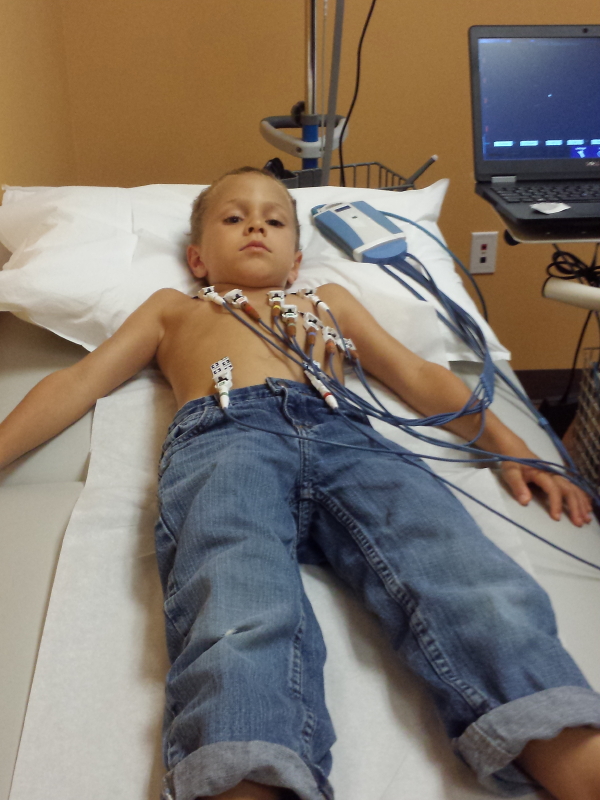 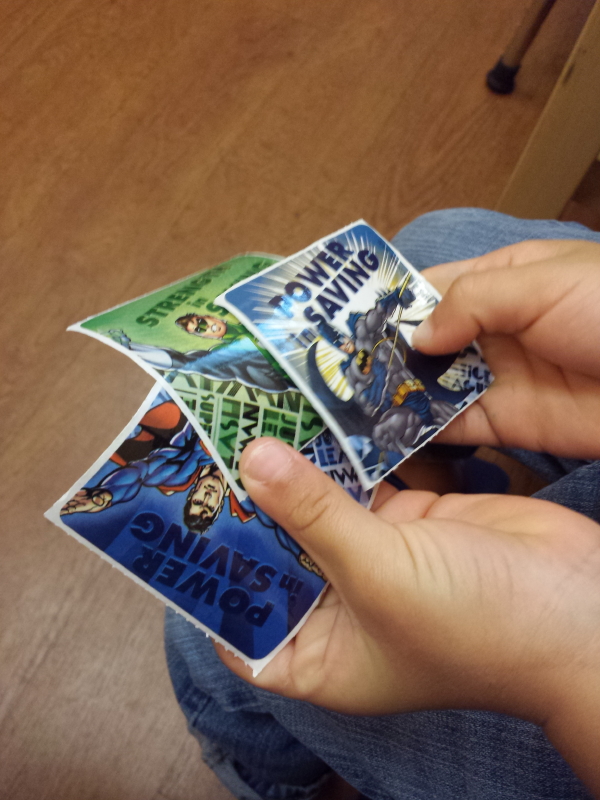 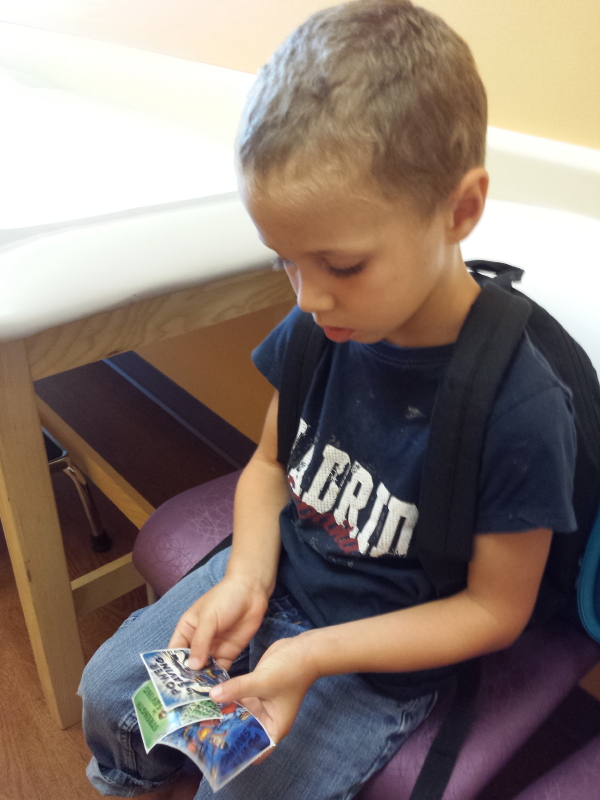 Katie visited the dentist for the first time.  All of my kids LOVE going to the dentist.  They have a friendly, fun dental hygienist (who is also very pretty!), which makes the trip something to look forward to.  Katie was no different than the boys.  She hopped right up on her seat and opened wide.  Her favorite part?  Choosing a toy from the toy bin, of course. 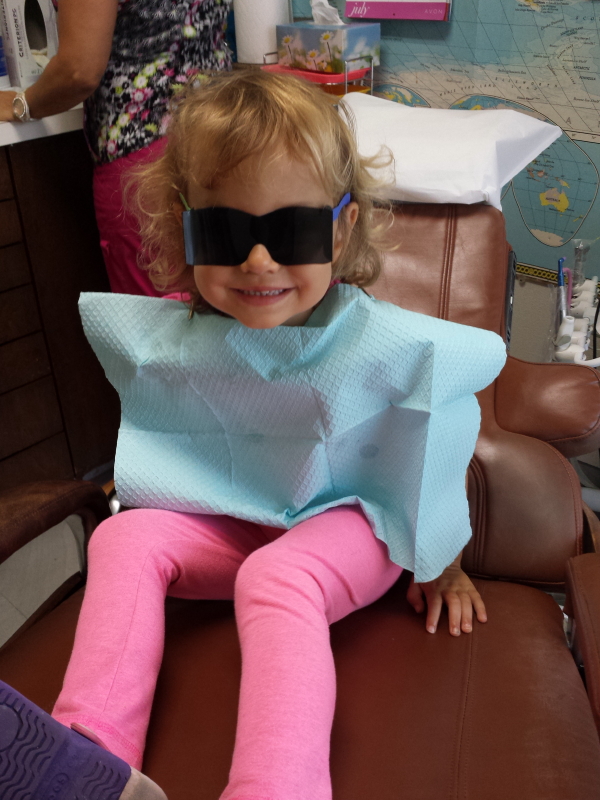 We had a surprise visitor in July!  Alex came down with Granny and Pappy for a day to surprise the boys.  They were thrilled!  William had cashed in some allowance on a foam plane so we headed to the park to try it out… 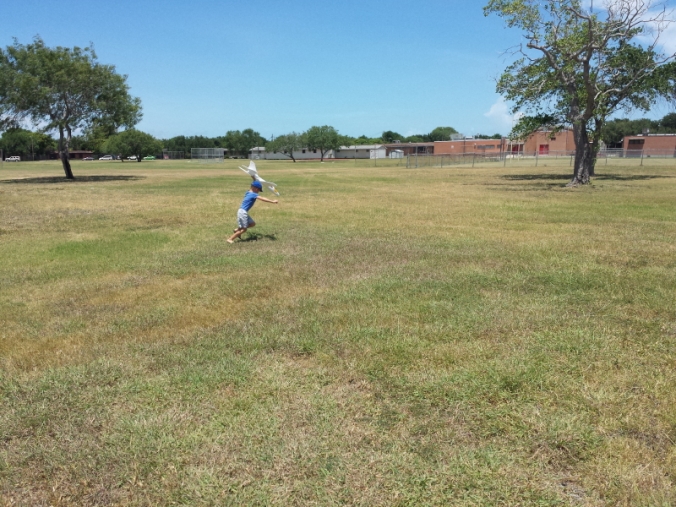 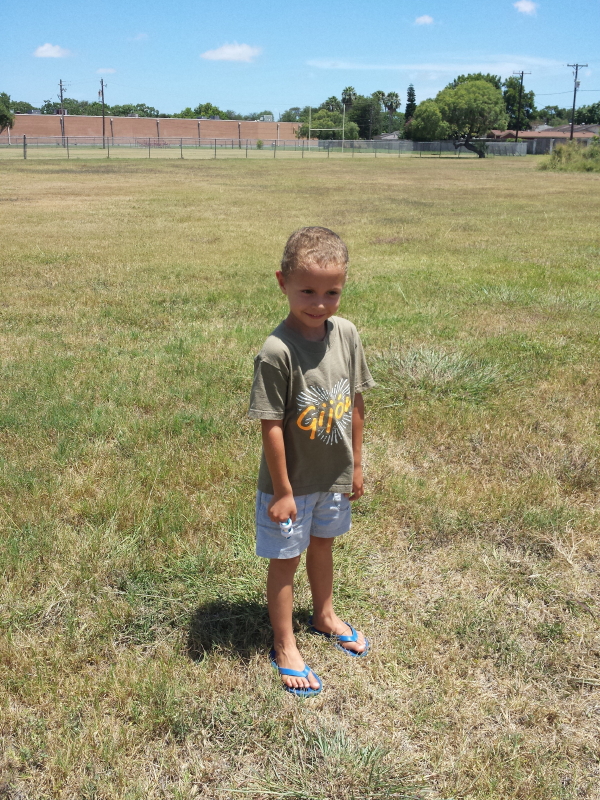 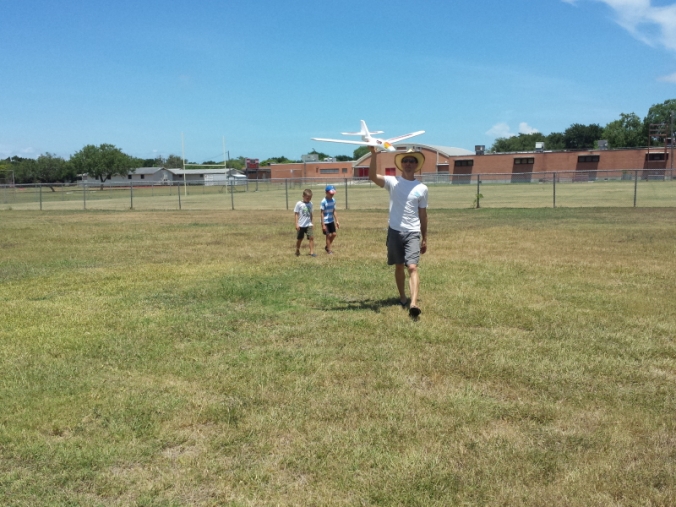 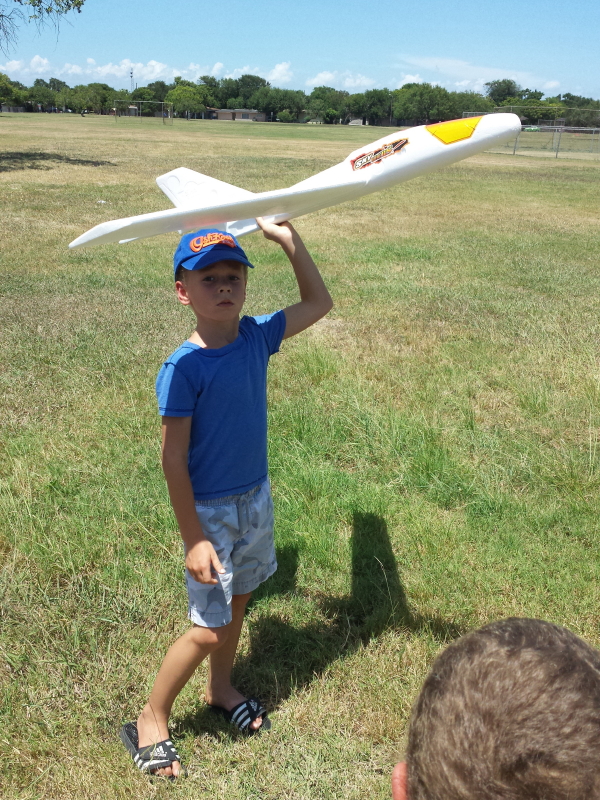 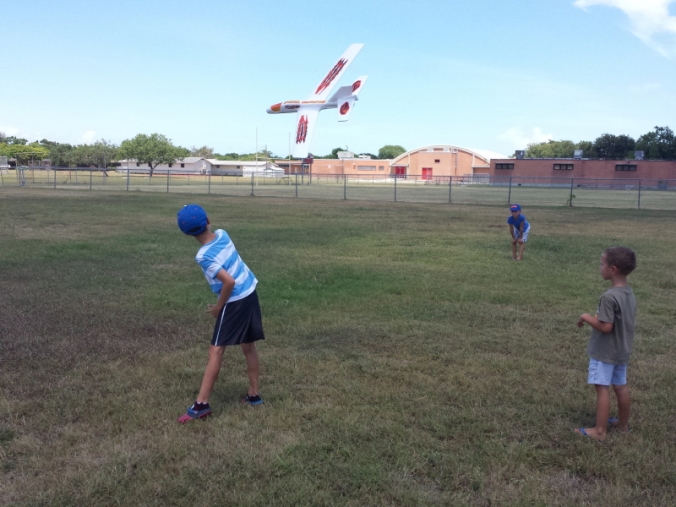 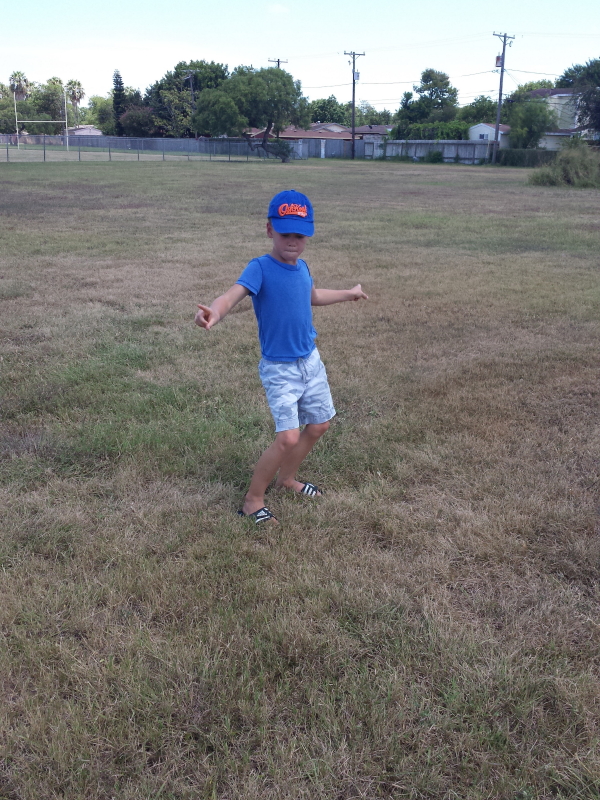 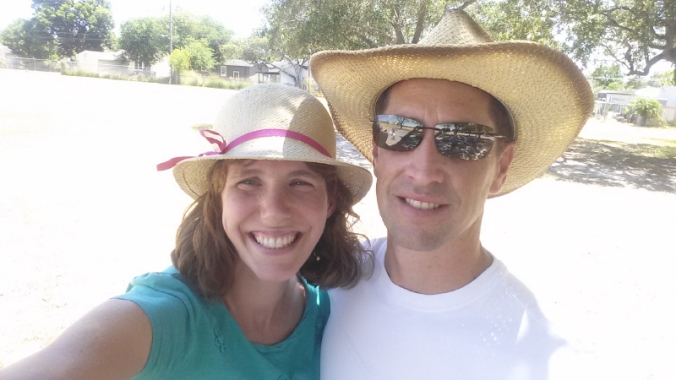 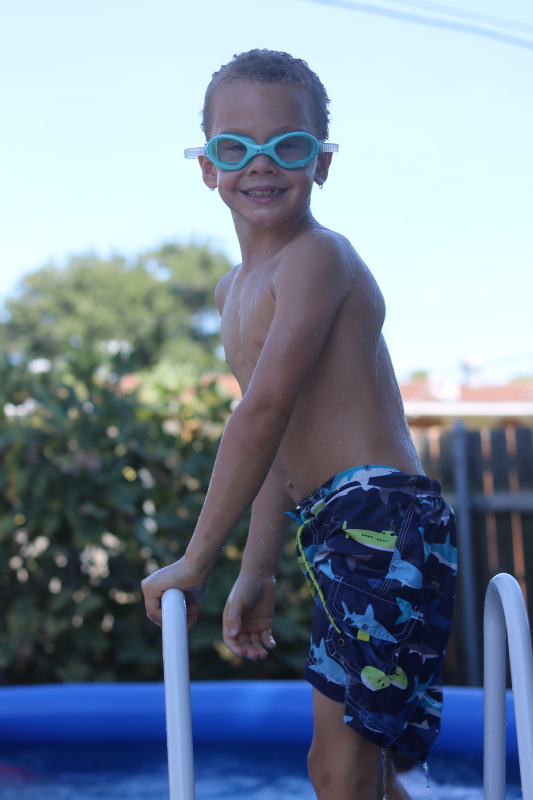 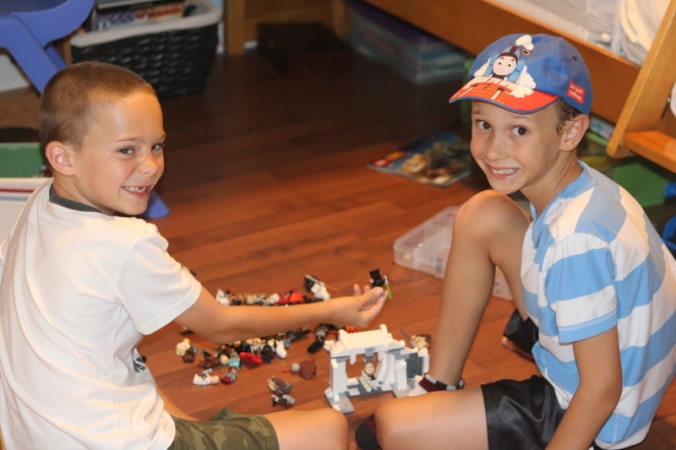 A few last random July events included wild bedhead, watching the Honda get towed (it’s fixed and fine now), fitting Katie’s hair into a ponytail, Andrew learning that 5 might just be too little for a pocketknife, and some cowboy time. 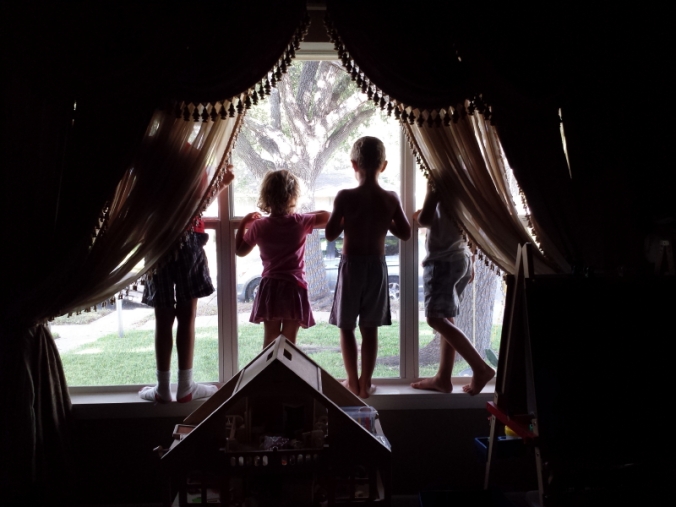 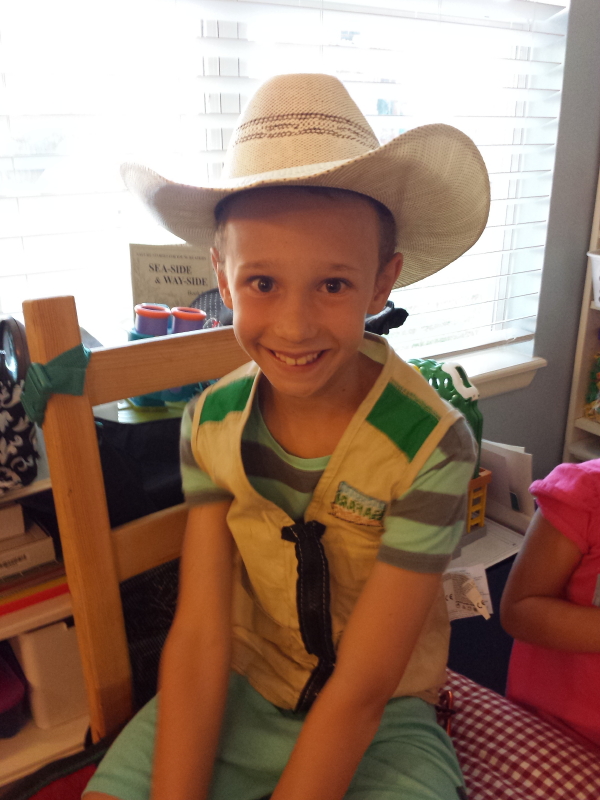