I used to be a good traveler.  At least as far as the actual flying went.  I would get on the plane, find my seat and then I’d buckle up and relax.  I’d grab my book and immerse myself in a good story.  With the plane high above the Earth, soaring through the clouds, I’d often close my eyes and doze off.  For a natural born worrier, it was nice to have a few hours worry-free. 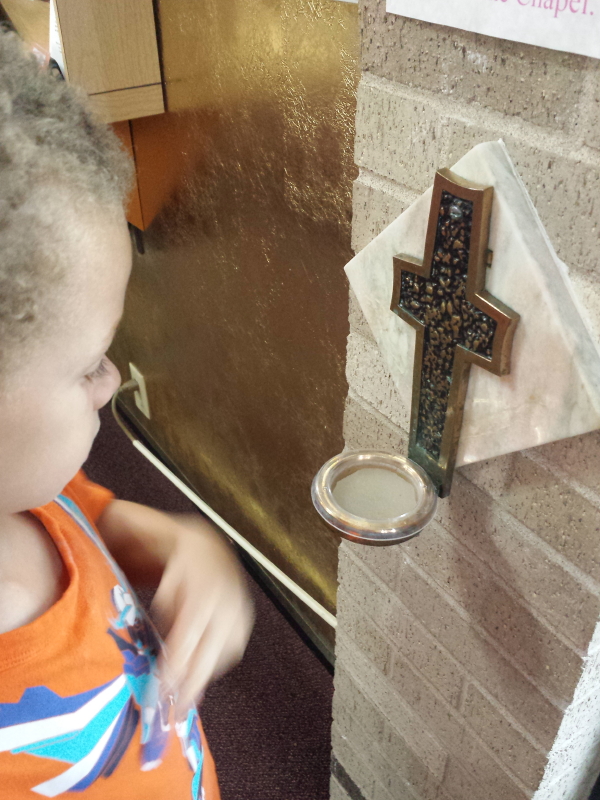 It seems almost ironic that something so big could give me relief from a life of worry.  The plane could crash at any moment.  Terrorists could be on board.  The pilot could have a heart attack.  But none of those things registered in my mind because THEY WERE OUT OF MY CONTROL.  Once I stepped foot on that plane, there wasn’t anything I could control anymore.  I was at the mercy of the pilot, the weather, God, whatever being was, at that point, greater than me.  I relaxed and let go.

Often, I offer up a prayer to God and then just as quickly, I snatch it back.  Surely, I, as a mother, need to help God out.  God often humors me, allowing me to rest in the illusion that I have some control over the fate of my children.  But more often than not, God gently reminds me that it’s in His control.  Not mine.  His children.  Not mine.  His divine plan.  Certainly not mine.

Six years ago, William had a cyst on his eye that had to be removed.  The surgery itself was no big deal but, because of his age, it required general anesthesia.  I fretted.  I prayed for the cyst to just disappear.  I worried.  God gently led me through that experience and He was kind enough (as He always is) to offer his unending support, a fatherly embrace to fall into when it felt overwhelming.  And I clung.  Until I could offer prayers of thanksgiving after the surgery, I clung to the reality that God has a will and it is not within my mothering powers to always be in control.

It’s easy to forget that reality.

Now fast forward 6 years.  After discovering a bit of an abnormality with William’s, ahem, boy parts, Dax took him into the ER one Saturday afternoon.  I didn’t worry (okay, I worried a little).  I tried my best to let God handle this one.  I prayed.  After 4 hours of waiting and testing and waiting some more, they returned home.  He had an inguinal hernia with a hydrocele which would need to be repaired and drained.

So now 6 years after his first surgery (to the exact day), William was going to have surgery again.  Again, it was a minor surgery, but the thought of general anesthesia is enough to make any parent panic.  Plus this surgery presented quite a few more possible complications than his last one did.

After two weeks of setting up appointments, visiting with the surgeon and answering the millions of questions my naturally curious children have, I thought we were ready for the surgery.  By this point, I remembered my reality and I wasn’t worried.  I knew if I tried hard enough, I could find something to worry about.  But then I remembered flying and letting go and how good it felt to just let God handle it.  So that’s what I did. 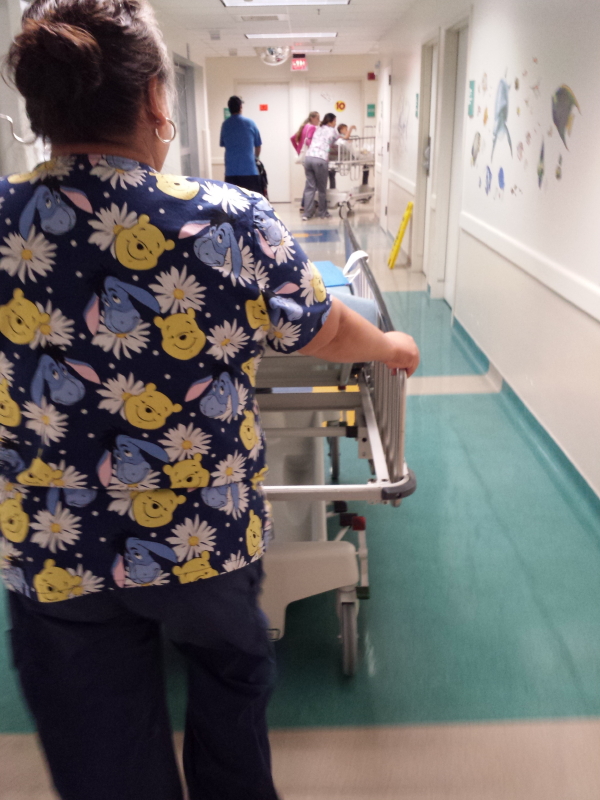 There’s a plan for each of our lives and while it may not always feel easy or right, it’s His plan.  He’s the great author and the story is always so much nicer when we allow the author unrestricted access to the storyline.

William, on the other hand, is just beginning down the long, paved path of worry.  His mind works overtime trying to explain everything that happens and the reason for it.  His heart wants to trust, but his mind wants to understand. 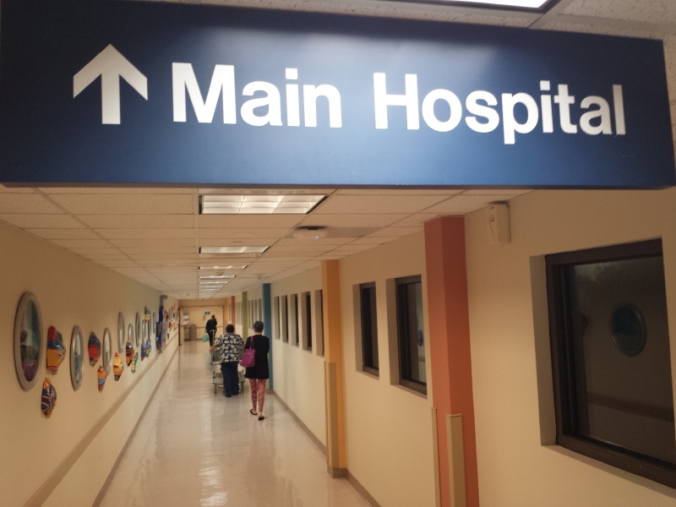 The week before his surgery, William requested a visit to confession and a blessing from the priest.  He received both.  His worries lessened.

The day before September 1st, William was nervous, though.  So very nervous.  He was worried.  I reminded him that if he wanted peace, there was only one place to go…straight to the Prince of Peace.  He mulled it over and quietly asked to be taken to Adoration to visit our Lord.  He knelt down and quietly prayed, “Dear Jesus, please guide me to have no worries and no complications.  Please bless the doctors’ hands.  Help me to give it all to You, Jesus.  Amen.”  And he was filled with peace.  No more worries.  No more anxiety.  We returned home, peaceful, in anticipation of the next day. 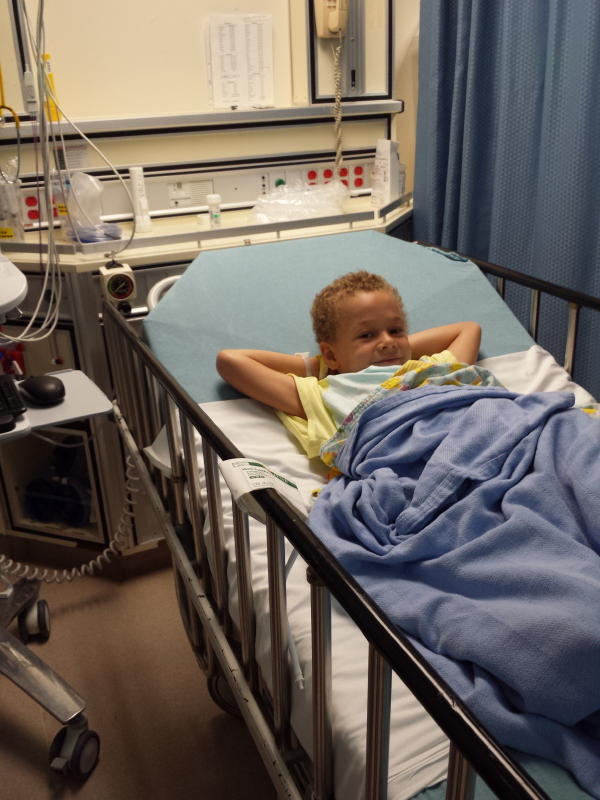 That night he asked for his prayer blanket that he had taken into surgery with him 6 years before.  I had told him he could take something else soft with him to surgery if he’d like, but he replied that what he really wanted to take wasn’t soft.  I asked what it was that he wanted to take.  “My rosary,” he replied.  Granny offered to sew a pocket onto his blanket and we found a plastic rosary to put inside.  He was ready.

Thursday morning came early.  William woke up at the touch of my hand, quickly crawling out of bed, eager to get dressed and be on his way.  We arrived at day surgery and were quickly processed and put in a room.  William changed into his gown and snuggled under his prayer blanket.  Chipper, alert and peaceful.  I took my cue from him.  He was peaceful so I was peaceful.  He was trusting so I was trusting.  He was relaxed so I was relaxed. 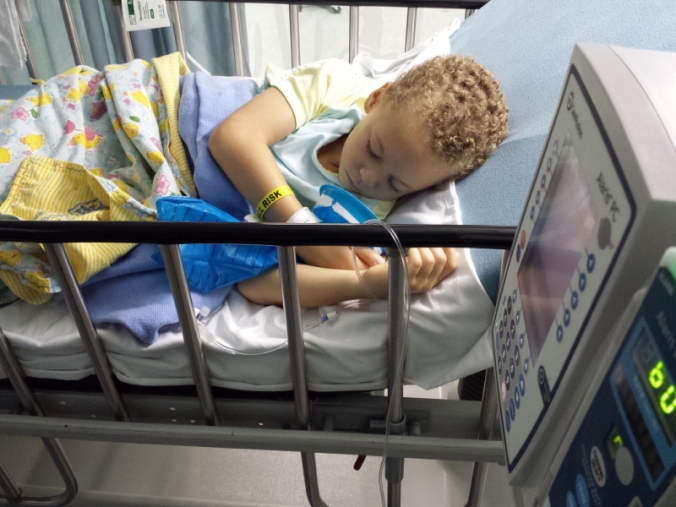 They wheeled him over to the holding area where he was given his happy medicine and we visited with the anesthesiologist.  For a minute, as I listened to Dr. Velleman explain the anesthesiology procedure, doubt began to nibble away its way in.  Then William pulled out his rosary to show Dr. Velleman and Dr. Velleman, in return, showed William his 4-Way Cross that was hidden beneath his shirt.  An inspired moment.  My fears faded away.

William’s doctor came in after that. William had written a note to Dr. Cruz-Diaz the night before explaining to him that if he noticed William’s two missing teeth, he should not worry.  William was convinced that Dr. Cruz-Diaz would assume he knocked them out and they’d be frantically searching the OR trying to find them.  I handed Dr. Cruz-Diaz the letter and in his typical humor, he read it very seriously, making a show to the OR nurses surrounding him that they should all be aware of the tooth situation.  William giggled.  My heart smiled.

And then, just like that, it was time.  As I gave him a kiss, I let go.  This wasn’t my deal anymore.  From this point on, it was just like being on an airplane again.  It was out of my control.  Lucky for me, I personally know the man in charge up there and I was more than willing to let go of the control I so naturally crave (I am human to an embarrassing degree). 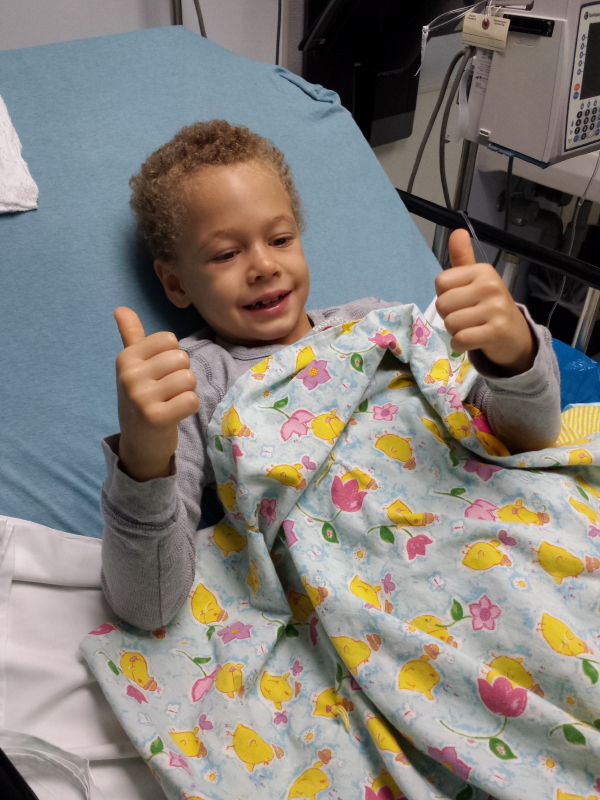 *An important note: It helped tremendously (with both this surgery and his last) to have an amazing team at Driscoll Children’s Hospital, from the check-in receptionist to the nurses (both the nurses in the OR and the recovery room) to the doctors, at our side, guiding us through the entire ordeal.  The team of OR nurses were both kind and considerate, and patient enough to answer my few remaining questions.  Dr. Velleman was soft-spoken and reassuring as he explained the entire process, his faith shining through in his regard for the patient as an individual.  Dr. Cruz-Diaz had an amazing bedside manner, joking with William, which instantly put him at ease.  He was patient and thorough in his explanation and consultation after the surgery, with a respect for privacy.  Many of the doctors came straight into the waiting room and explained the surgery in front of whoever was waiting there…I appreciated that Dr. Cruz-Diaz made use of the Patient-Surgeon Consultation Room.  William’s Recovery Room nurse, Mindy, was amazing!  She was kind and compassionate and so cheerful.  She went out of her way to be sure William was comfortable and well taken care of.  Her smile lit up the room and made William feel special.  No hospital procedure is successful without a team of compassionate caregivers and, lucky for us, ours was bursting with compassion!