I had it all planned out.  For Valentine’s Day, I was going to help Joseph and William make homemade Valentine cards and then Joseph and I would bake brownies and cupcakes for all of our loved ones.  So I skimmed through some craft books and came up with a cute little design for the kids’ Valentines.  Joseph’s Valentines would feature his handprints artfully arranged to look like a heart and William’s Valentines would have his little handprint posing as a flower.  Oh they were going to be so cute!

So I got out the paint and began the task of convincing little people to cooperate.  Joseph was so excited.  He kept telling me, “I’m going to make Valentine cards with lots of hearts.”  He happily picked up the brush to begin his artwork, but I quickly grabbed it and explained that we were going to paint his hands so he could make his hands look like a heart.  Not quite understanding me, but willing to try it out, he followed my directions perfectly and soon we had plenty of Joseph hearts.  I washed him up and said, “Okay, now you need to write I love you on each Valentine.”  Okay…he seemed to go along with it so I set him down to do his writing while I picked up a wiggly little William and began the almost impossible task of capturing a baby’s handprint on paper (once that paint is on a baby’s hand, they just want to squish their little hands together…not lay their hand flat for a beautiful masterpiece!)

Finally after getting William to unscrunch his hands long enough to get his handprint, I looked over at Joseph and he was still sitting there with the black crayon in hand, just looking at me.  “C’mon, sweetie,” I said, “you’ve got to write I love you on each card…that way your Valentine cards will be done.  Do you need help?”  Of course he said no he didn’t need my help (did you read the blog No, Mom, No?).  Very hesitantly he wrote I love you on the first card.  Then the second.  And the third.  Then he looked at me and said, “But Mom I thought we were going to make Valentines.  I was going to draw so many hearts.”

Ouch.  Once again, I let my elaborate Mommy ideas get in the way of what was truly important.  Joseph wanted to make Valentines.  He was excited to show his love by taking the time to make his own Valentines…not a mommy inspired, complicated piece of artwork.  So we turned over the mommy inspired handprints and Joseph began the task of designing his own cards.  A simple little hand-drawn heart.  One per card.  One per loved one.  So simple.  So beautiful.  So definitely from his heart.

So this year I learned a valuable lesson.  I learned the value of simplicity.  And this year, each person that received a Valentine from our house really received 3…one from William, one beautiful heart drawn especially for them by Joseph, and one from Mommy (with the help of Joseph’s hands).  So Happy Valentine’s Day from all of us!

P.S.  We did still ending up baking brownies and cupcakes.  Although it was Mommy inspired, it was still a huge success (really what project that involves frosting and cake isn’t a success?)

The night before Valentine’s Day, Joseph called each family member and asked if they’d prefer brownies or cupcakes.  He took the results and made a graph (super sneaky, wasn’t it…sneaking math into a Valentine’s Day project?!). 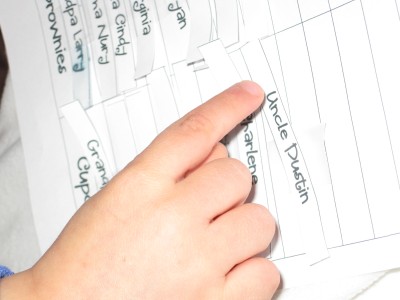 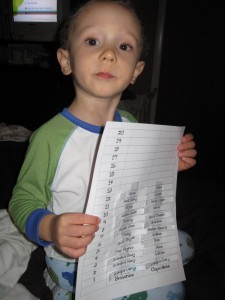 Then early on Valentine’s Day morning, Joseph and I frosted and decorated brownies and cupcakes.  Having learned the simplicity lesson on the cards, I skipped the fancy decorating tips and handed over the sprinkles and heart decorations, because that’s what he told me he was going to do to decorate the cupcakes.  And he did.  And they were beautiful (and extremely yummy!). 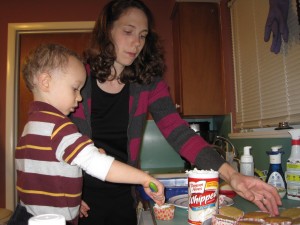 P.S.S.  I also learned another lesson…never leave Dax in charge of the kids when they’re painting!

That's pink paint all over his head and in his hair.

One thought on “Valentine’s Day…a reflection on simplicity”