This article was first published in August 2014 in The Bend magazine. 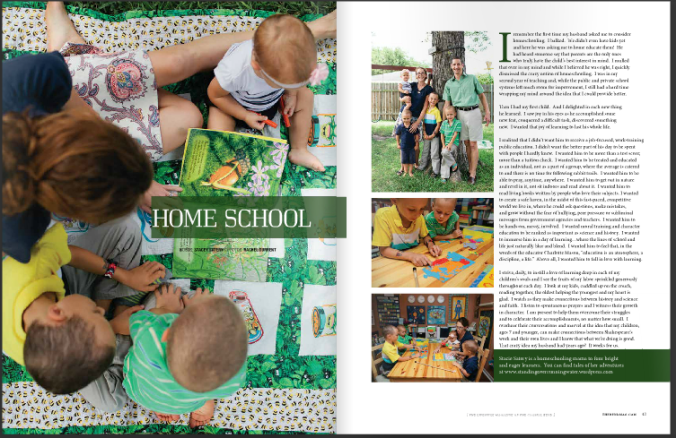 I remember the first time my husband asked me to consider homeschooling. I balked. We didn’t even have kids yet and here he was asking me to home educate them! He had heard someone say that parents are the only ones who truly have the child’s best interest in mind. I mulled that over in my mind and while I believed he was right, I quickly dismissed the crazy notion of homeschooling. I was in my second year of teaching and, while the public and private school systems left much room for improvement, I still had a hard time wrapping my mind around the idea that I could provide better.

Then I had my first child. And I delighted in each new thing he learned. I saw joy in his eyes as he accomplished some new feat, conquered a difficult task, discovered something new. I wanted that joy of learning to last his whole life.

I strive, daily, to instill a love of learning deep in each of my children’s souls and I see the fruits of my labor sprinkled generously throughout each day.  I look at my kids, cuddled up on the couch, reading together, the oldest helping the youngest and my heart is glad.  I watch as they make connections between history and science and faith.  I listen to spontaneous prayers and I witness their growth in character.  I am present to help them overcome their struggles and to celebrate their accomplishments, no matter how small.  I overhear their conversation and marvel at the idea that my children, ages 7 and younger, can make connections between Shakespeare’s work and their own lives and I know that what we’re doing is good.   That crazy idea my husband had years ago?  It works for us.

Please hop over to The Bend magazine to see it in its original beautiful print.

One thought on “Why I Homeschool”